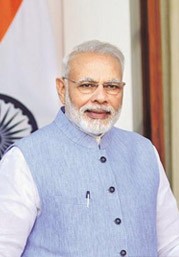 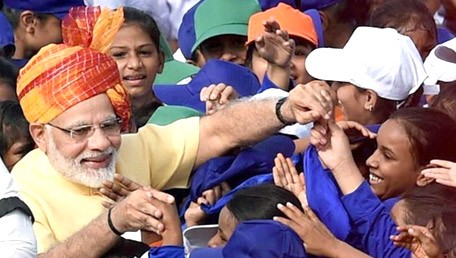 Born in September, 1950 at Vadnagar, a small town in Mehsana district of North Gujarat, Shri Narendra Modi grew up in a culture that instilled in him the values of generosity, benevolence and social service. During the Indo-Pak war in the mid sixties, even as a young boy, he volunteered to serve the soldiers in transit at railway stations. In 1967, he served the flood affected people of Gujarat. Endowed with excellent organizational capability and a rich insight into human psychology, he was elected as the student leader of AkhilBhartiyaVidhyarthiParishad (All India Students’ Council) and played a prominent role in various socio-political movements in Gujarat. Right from his boyhood days he was confronted with many odds and obstacles, but he transformed challenges into opportunities by sheer strength of character and courage. Particularly when he joined college and University for higher education, his path was beset with hard struggle and painful toil. But in the battle of life he has been always a fighter, a true soldier. Having put his step forward he never looked back. He refused to drop out or be defeated. It was this commitment which enabled him to complete his post graduation in political science. He started with the RashtriyaSwayamsevakSangh (RSS), a socio-cultural organization with a focus on social and cultural development of India and imbibed the spirit of selflessness, social responsibility, dedication and nationalism.

During his tenure with the RSS, Shri Narendra Modi played several important roles on various occasions including the 1974 Navnirman anti-corruption agitation and the harrowing 19-month (June 1975 to January 1977) long ‘emergency’ when the fundamental rights of Indian citizens were strangled. Modi kept the spirit of democracy alive by going underground for the entire period and fighting a spirited battle against the fascist ways of the then central government. He entered mainstream politics in 1987 by joining the BJP. Just within a year, he was elevated to the level of General Secretary of the Gujarat unit. By that time he had already acquired a reputation for being a highly efficient organizer. He took up the challenging task of energizing the party cadres in right earnest. The party started gaining political mileage and formed a coalition government at the centre in April 1990. This partnership fell apart within a few months, but the BJP came to power with a two-thirds majority on its own in Gujarat in 1995. Since then, the BJP has been governing Gujarat.

Between 1988 and 1995, Shri Narendra Modi was recognized as a master strategist who had successfully gained the necessary groundwork for making the Gujarat BJP the ruling party of the state. During this period, Shri Modi was entrusted with the responsibility of organizing two crucial national events, the Somnath to AyodhyaRathYatra (a very long march) of Shri L.K. Advani and a similar march from Kanyakumari (the southernmost part of India) to Kashmir in the North. The ascent of the BJP to power at New Delhi in 1998 has been attributed to these two highly successful events, substantially handled by Shri Modi. In 1995, he was appointed the National Secretary of the party and given the charge of five major states in India – a rare distinction for a young leader. In 1998, he was promoted as the General Secretary (Organization), a post he held until October 2001, when he was chosen to be the Chief Minister of Gujarat, one of the most prosperous and progressive states of India. During his stint at the national level, Shri Narendra Modi was given the responsibility to oversee the affairs of several state level units, including the sensitive and crucial state of Jammu and Kashmir and the equally sensitive north-eastern states. He was responsible for revamping the party organization in several states. While working at the national level, Shri Narendra Modi emerged as an important spokesman for the party and played a key role on several important occasions. During this period, he travelled extensively across the world and interacted with eminent leaders of several countries. These experiences not only helped him develop a global perspective but also intensified his passion to serve India and lead it towards the socio-economic supremacy in the comity of nations. In October 2001, he was called upon by the party to lead the Government in Gujarat. When Shri Modi ‘s government was sworn in on October 7, 2001, the economy of Gujarat was reeling under the adverse effects of several natural calamities, including a massive earthquake in January 2001. However Shri Narendra Modi, a master strategist, who was enriched by national and international exposure and experience, decided to take the bull by its horns. The biggest challenge which he had to face,

when he took over as the Chief Minster, was the reconstruction and rehabilitation of the areas affected by the massive earthquake of January 2001. Bhuj was a city of rubble and thousands of people were living in temporary shelters without any basic infrastructure. Today Bhuj is proof of how Shri Narendra Modi has turned adversity into an opportunity for holistic development. Even when the reconstruction and rehabilitation was going on, Shri Narendra Modi did not lose sight of the bigger picture. Gujarat had always focused on industrial growth. Shri Narendra Modi decided to correct the imbalance by focusing appropriately on social sectors for an integrated socio-economic growth. He conceived the PanchamritYojana – a five-pronged strategy for an integrated development of the state.

Under his leadership, Gujarat is witnessing massive transformation in several sectors including education, agriculture, healthcare and several others. He developed a clear vision of his own for the future of the state, launched policy-driven reform programmes, reoriented government’s administrative structure and successfully put Gujarat on the road to prosperity. His intentions and capacity were noticed within the first 100 days of his coming to power. Little wonder that these skills coupled with his administrative acumen, clear vision and integrity of character translated into a landslide victory in the December 2002 general elections and the Modi government was voted back to power with a massive majority of 128 seats in a house of 182. This victory was even more impressive than what is suggested by the figures because of the fact that the opposition Congress party had concentrated its nationwide resources on the Gujarat elections. Skilfully wading his way through the onslaught of a massive slander campaign unleashed by the opposition, Shri Narendra Modi gave a crushing defeat to the principal opposition party, the magnitude of which stunned friends and foes alike.

On December 22, 2002, when he was sworn-in as the chief minister of Gujarat for the second time, the ceremony had to be held in an open-air stadium because of the sheer number of people who wanted to watch and hear the leader they had so overwhelmingly elected. People’s expectations have been more than fulfilled. Today Gujarat is leading the nation in a variety of sectors be it e-Governance, investments, poverty eradication, power, SEZs, road development, fiscal discipline and many more. The heart of the matter is the people’s participation.

Fighting against all odds, he ensured that the Narmada dam reached 121.9m. Height – He even observed a fast to counteract those obstructing the construction. “SujalamSufalam” – a scheme to create a grid of water resources in Gujarat is yet another innovative step towards water conservation and its appropriate utilization. Certain novel ideas like introduction of Soil Health Cards, Roaming Ration Cards and Roaming School Cards show his concern for the most common man of the state. His initiatives such as KrishiMahotsav, ChiranjeeviYojana, MatruVandana, BetiBachao campaign (save the girl child), JyotigramYojana, and KarmayogiAbhiyan etc. aim at multi-dimensional development of Gujarat. The vision, concept and time-bound implementation of such initiatives is what makes Shri Narendra Modi stand out as a true statesman who thinks of the next generation against the backdrop of politicians who can only think as far as the next elections.

Widely regarded as a youthful and energetic mass leader with innovative thoughts, Shri Narendra Modi has successfully communicated his vision to the people of Gujarat and has been able to impart faith, trust and hope among more than 50 million people of Gujarat. His outstanding memory of addressing lacs of people, even common men, by their first name has made him the darling of the masses. His immense respect for spiritual leaders has helped build bridges across religions. A wide crosssection of the people of Gujarat, cutting across income groups, religions and even political affiliations, continue to adore Shri Narendra Modi as an able and visionary leader who is transparently and convincingly uplifting the quality of their lives. A skilled orator and a deft negotiator, Shri Modi has earned the love of people from villages and cities alike. His following encompasses people belonging to every faith and religion and every economic section of society.

It is under his able leadership that Gujarat has bagged several awards and accolades from all over the world – including UN Sasakawa Award for disaster reduction, Commonwealth Association for Public Administration and Management (CAPAM) award for innovations in governance, UNESCO award, CSI award for e-Governance etc. The very fact that Shri Narendra Modi has been ranked as the number one Chief Minister by the public for three consecutive years speaks volumes for his achievements. His masterstroke of putting Gujarat on the global map essentially is ongoing campaign called the Vibrant Gujarat that truly transforms Gujarat into one of the most preferred investment destinations. Gujarat has been registering double digit growth rates for the past several years. While Gujarat continues to accelerate on the path of growth and development, the voyager continues to walk tirelessly, leaving behind his footprints on the sands of time, transforming milestones into smilestones, step by step and marching towards the goal to celebrate the golden jubilee of the state in 2010, when Gujarat will proudly stand among developed economies of the world.

Even an overview of his journey in politics from grass-roots to the helm will speak volumes of his ever rising stature as a leader. If one looks for the ideas and ideals of leadership, here is a classic role model showing how the youth, endowed with strength of character, courage, dedication and vision at once flowers into creative leadership. It is not quite common to see, in public life, a man with such profound spirit of service and fixity of purpose; loved so well by the people whom he loves so deeply. He has, in not so long span of time, emerged as the man of destiny.